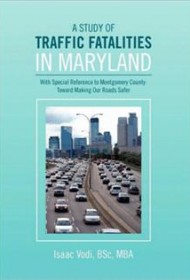 Born and reared in Ghana, Isaac Vodi, arrived in the United States during 1978 and eventually became interested in American roadways, drivers and fatal accidents. The owner of a driver’s education business, Vodi decided to study traffic fatalities systematically. In 2010, he completed a master’s degree project at Strayer University. A Study of Traffic Fatalities in Maryland is a reprint, in book format, of the master’s degree project, apparently verbatim.

The book is a compendium of media reports, statistics, qualitative research language and various statements about lessons learned regarding traffic safety. The primary question Vodi tries to answer is: “how do we make our roadways safer?” The book shifts among the national situation and the statewide situation in Maryland, with a focus on Montgomery County, Maryland, a suburban area of Washington, D.C.

Vodi’s findings comport with common sense: that traffic fatalities constitute a problem, and that solutions are available to alleviate the problem. Human error is a far bigger factor in fatalities than mechanical errors, according to Vodi. If drivers, bicyclists and pedestrians obeyed traffic laws, fatalities would almost surely decrease significantly, he believes.

Most student projects at the university level–including master’s degree theses and doctoral dissertations–never become books offered to a general readership. Those that do become books are usually rewritten to appeal to an audience broader than a small graduate faculty committee of readers. There is no indication that Vodi revised his master’s degree project for a general readership. The prose is dry, the pages are filled with grammatical errors and punctuation mistakes, the flow of the text is nearly non-existent.

Because most readers can relate to traffic problems, including fatalities, the book carries potential interest. But a substantial rewriting would be necessary before the book could be recommended beyond Vodi’s faculty committee, friends and relatives.