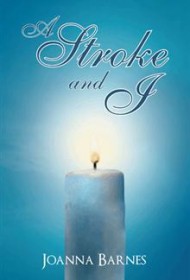 Determination to live life fully despite serious medical issues is the thread throughout Joanna Barnes’s memoir of her life in the UK.

The author of A Stroke and I begins with her early years as the only girl in a family of five. With her best friend Sandra, she got into plenty of innocent trouble in their small town. (Whoopee cushion on a favorite teacher’s chair, anyone?) But as Joanna states, “things change.”

At the age of 16, she suffered a major stroke. During two weeks in a coma, her heart stopped three times. Months of rehab followed while she relearned to talk and walk. But being an attractive teen in rehab can pose dangers, and sadly, a male patient took advantage of her disabilities and molested her.

Yet this only made her more determined to become mobile. Throughout A Stroke and I, the author’s resolve comes through as she deals with difficult family relationships, a suicide pact between her and her husband, encountering the sexual predator again, plus more hospitalizations.

Joanna’s matter-of-fact discussion of her frequent falls, seizures and hospitalizations shows she isn’t defined by her medical problems. Instead, she meets challenges with spirit, enjoying vacations in Tunisia, holiday gatherings, even earning a green belt in Tae Kwon Do.

The book ends with memories of her 40th birthday: “I’m glad to be alive…glad to be married to my husband, David, who is my life stone for now and always.”

While an inspirational story, A Stroke and I could have benefited from tighter editing of its many run-on sentences and to correct punctuation errors. It would also find a greater audience among general readers if it devoted less space to coverage of mundane events. As it stands, it will appeal mostly to family and friends, who will want to read this chatty memoir to see how they are depicted — and to learn more about the author’s “happy and sad bits!”