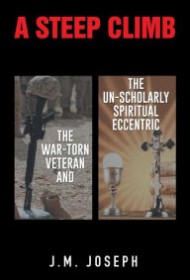 Although A Steep Climb is labeled “fiction” on the copyright page, the book appears to be a memoir. Told in first person and including personal photographs and a bibliography, the story revolves around the narrator’s spiritual journey intertwined with the struggles of his childhood friend Lou, whose life was nearly destroyed by addiction and PTSD after serving in Vietnam.

Growing up as next-door neighbors in Hawaii, Lou and John are as close as brothers; when Lou calls home, his family shouts across the way for John to come over and talk, too. It’s clear that Lou is damaged by the war; on leave he drinks to the point of blackout and mutters about My Lai and Hamburger Hill.

In their conversations, the two friends talk about war, God, and other topics as Lou moves from place to place, trying to get his life in order. The narrator details Lou’s fight to get VA coverage for his various ailments, as well as the steps he himself took to fulfill Lou’s dying wishes after he finally passes away, including traveling to Los Angeles to inform members of his twelve-step group of his death.

A Steep Climb is a matter-of-fact account of this friendship, without the artistic flair of more accomplished memoirs. In their conversations about God, it often feels as if John is lecturing Lou about Christian doctrine, and the passages can be lengthy at times. These moments give the book an evangelical bent and distract from what is ultimately a moving portrait of his friend.

Unfortunately, many readers are likely to find the religious agenda offputting and coming at the expense of a more dynamic narrative. Even so, t’s touching to see John’s concern for and dedication to his friend. We could all hope to have an advocate like him in our corner when times are tough.