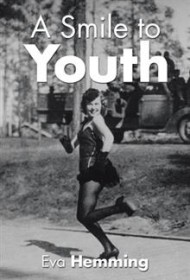 Eva Hemming’s delightful memoir of life as a budding ballerina in WWII-era Europe is about life during wartime and an artist’s love of her craft in equally satisfying measures.

Born in Finland in 1923, the quietly ambitious Hemming trained in Helsinki with Russian ballerina Elisabeth Apostoli. This “ballet mother” not only taught her how to dance—including the choreography for Anna Pavlova’s famous “The Dying Swan,” which became the showpiece of Hemming’s career—but also how to behave: a ballerina must be “like a jewel,” Apostoli said, displaying fine aesthetics and good taste.

That training shines through in striking photos of Hemming in her prime, wearing impeccable costumes she assembled from old clothing. It’s also conveyed in her humble, lyrical storytelling. With concise writing (translated into English by her daughter Evita Wager), Hemming chooses telling details.

Wartime interfered with Hemming’s training and put her in danger. (Finland fought the Soviet Union in battles apart from WWII, but happening within the same era.) Rehearsals took place in rooms darkened by blackout curtains, often interrupted by air raid sirens. Hemming, dancing with the Finnish Opera, joined other Opera members on tours to the Soviet Front to raise soldiers’ morale.

Hemming dodged romantic perils, as well. She describes resisting one Finnish Opera colleague’s crude advances, but generally omits unsavory stories. She comes across as chaste and admits that others thought her arrogant because she kept to herself to avoid harassment. Around age 20, Hemming began dating Finnish actor Leif Wager, and she charmingly relates their passionate courtship.

Disappointingly, the story ends soon after she weds Wager. Only in a brief epilogue do we learn that the couple remained married for 46 years until Wager’s death in 2002, and Hemming also started a ballet school, published books, and opened a store.

Hemming’s memoir is a joy to read. It will surely interest dancers, students of history, and anyone who wonders what it’s like to be wooed by a celebrity.