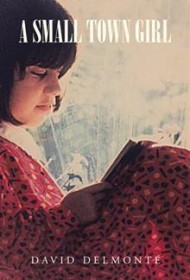 David Delmonté’s novel A Small Town Girl pivots around a cast of small town characters whose lives are upended when an unscrupulous young women comes to town and sets her mind to staying.

Pity Grace Collins arrives in the rural town of Brownsville, pregnant and on a thieving spree with her boyfriend Davey. When he leaves her and she goes into labor, one of her victims comes to the rescue. From then on, she disrupts the lives of pretty much everyone she gets involved with — for good and bad. There’s more theft, cheating and otherwise dishonorable behavior, and not only from Pity. There is also romance, broken hearts, the quest for wealth and the obstacles of class divide.

Overall, the novel has much to commend it. Delmonté has a colorful way with words, turning a tale that has been told many times into a work that feels fresh. The dark side of human nature is frequently on display, but the story is never heavy handed, and is often quite light. His characters come alive and, for the most part, are sympathetic, and the plot is well paced, sometimes roaring along, other times slowing to a more leisurely tempo.

There are, however, some flaws. While the story is set in the rural southern U.S., Delmonté uses language that is generally heard only in the U.K., such as “faggots” for cigarettes, and “boot” for the trunk of a car. In another scene, he switches from the symbol for American dollars to that of the British pound. These are minor enough that they don’t significantly impact the story, but unfortunate because they stand out in an otherwise well-rendered tale.

Despite such lapses, A Small Town Girl offers an enjoyable story. It is likely to be appreciated by a wide range of readers.