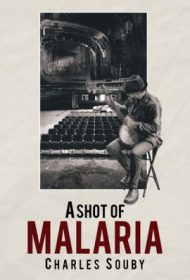 A Shot of Malaria is Charles Souby’s fictional story of a tumultuous year in the life of 30-something addict/alcoholic Daniel “Danny” Martin as he tries to kick heroin by entering a methadone maintenance program.

As the story begins, Danny struggles to incorporate the treatment and counseling into his regimen of scoring dope, playing folk songs on San Francisco streets for loose change, and getting drunk in dive bars. He loses his best friend and drinking buddy Cody to a brain tumor; falls and breaks his banjo, his only source of income besides some saving bonds doled out by his Aunt Teresa; falls in love with Caroline, a bartender, then mourns her death from a crack overdose.

As his life continues its downward spiral, he plans to throw himself off the Golden Gate Bridge. But when he’s arrested for possession of crack, his brother Bobby forces him to confess his addictions to Teresa, which begins a tentative family reconciliation. Eventually, despite Danny’s penchant for following his worst impulses, an opportunity for redemption appears.

The story includes all the monotony, lies, and delusions that come with alcohol and drug addiction. This repetition may test some readers’ patience. But those who persevere will be rewarded with several gifts.

First is Danny’s deadpan humor: “Wanting to be dead is exhausting,” he notes. Second, Souby paints a vivid picture of 1990s, pre-tech-boom San Francisco, a city proud of its renegade roots. And finally, he offers a heartbreaking—and surprisingly heartwarming—story of love and friendship. As dangerous and untrustworthy as Danny’s world is, he has friends who really listen to him and counselors who work on his behalf. He’s lucky to have a social network that sees, not a hopped-up, hopeless mess, but a fellow human being.

Readers will find a wealth of wisdom in these pages. As Danny notes: “We were both suicidal, but it wasn’t the dying that scared us, it was the living.”