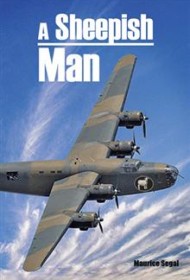 In the waning months of World War II, Robert Thornton White, a middle-aged, decorated fighter pilot from the previous world war, finds himself helping to train a new generation of pilots even as his own anti-war sentiment grows stronger by the day. He feels powerless as he watches his only child, also a pilot, rush too quickly into the skies to join the fight. This is the compelling undercurrent of emotion that simmers throughout Maurice Segal’s A Sheepish Man.

Despite the obtuse title, there are many fascinating elements to this tale as it captures a time in history on the cusp of world change. The story is set in Cairo, a way station for Allied troops from many nations during the war as they headed for battle in Europe. The main character is South African and hints in his conversation with his new lover (a nurse 20 years younger than himself who hopes he will marry her), of the coming racial storm in his homeland. Characters also hint of the possibility of a new Jewish state in the Middle East.

Even at only 121 pages, Segal’s novel displays his real gift for developing plot and creating tension as the story builds. The ultimate tragedy, while foreshadowed, still feels raw and devastating when it occurs. Segal’s failing — what keeps this novel from rising from pretty good to very good or even great — is the stilted, unnatural dialogue. Perhaps he was trying to recapture a formality of another time, but it rings false and can be cringe worthy (“Your beauty is only exceeded by your brain power”). He also uses letters between father and son as exposition to give history lessons on various aircraft development and military strategy. The information is interesting and probably has a place somewhere, but the letter device is overused and again, rings false.

Though flawed, the book deserves credit for its vivid, complex main character and for a snapshot of a restless, uncertain time.