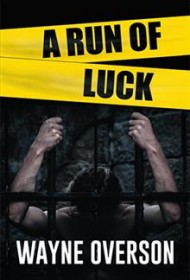 In this interesting crime novel, the author makes a case for outlawing the death penalty when his fictional character is wrongfully convicted of a crime.

In the early morning hours of April 1, 1977, a Utah convenience store is robbed and three people are killed. By chance, rookie deputy Kory Hovac is in the right place to make a speedy arrest of Lenny Bronk and Marty Montayne as they allegedly flee the crime.

The author, a former Utah Highway Patrol officer, clearly knows his way around this territory. The crime is presented so convincingly that readers may feel as if this is a work of nonfiction. But the true appeal of the book is watching the officers meticulously work the crime old-school style: following up one small lead at a time, checking phone books for addresses, chasing down suspects with endless leg work. When they find a damning hat with a black hair the color and type of Montayne’s, they have no real way to test it without DNA (the latter of which is just coming into play by the end of the book).

There are a few missteps, notably the author wraps up a couple romantic entanglements rather too neatly. That aside, the book skillfully lays out its case for the injustice of the death penalty – an issue that hasn’t been resolved even today.