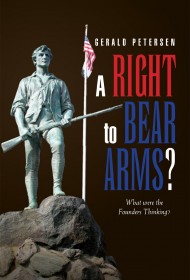 One of a writer’s worst fears is laboring over a book whose content becomes irrelevant by the time it is published. Author Gerald Petersen should have no worries. In light of recent mass killings in the United States, the conversation about private gun access is loud, white-hot and unlikely to diminish in the foreseeable future.

Petersen painstakingly deconstructs the Bill of Rights’ Second Amendment, taking us on a tour of history starting from the pre-Revolutionary War era that triggered its creation. He analyzes its wording and then leads us through the various Supreme Court cases that have interpreted and reinterpreted its meaning.

Petersen argues that the colonists wanted to ensure that each state’s militia had the power to protect the state in peace as well as war. He reminds us that those early post-Revolutionary War days were a different time and place from our 21stcentury, and that “self-defense” was not the focal point. While there was concern about an overreaching federal government, Petersen says, the colonists believed that it was the government’s responsibility to protect its citizens and were less concerned about ensuring citizens’ ability to defend themselves.

The emotionally charged debate over gun control often generates more heat than light. With his disciplined fact-finding and thoughtful logic, Petersen makes a convincing case that the framers of our Constitution and Bill of Rights did not intend or foresee that modern-day, loosely-regulated private gun ownership, in the guise of “the right to bear arms,” would become – as some see it – a threat to life, liberty and the pursuit of happiness.

Peterson refers to the often plodding language of the Constitution and Bill of Rights with a deft touch, respectful of the importance of the words without adopting the same heavy tone. If he has an agenda, he parks it outside the book’s pages, and we are better for it.