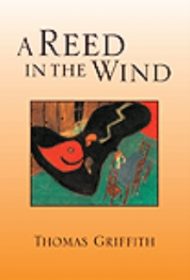 Part memoir, part fiction, A Reed in the Wind chronicles Thomas Griffith’s journey through life as a schizophrenic. By way of lyrical imagery, fanciful vignettes and personal experiences, Griffith walks us through his life-long (and highly relatable) search for trust, companionship, intimacy and happiness.

Arranged in stanzas and divided into what seem to be separate poems, the work reads more like prose. Sometimes, it offers interesting stories and images, such as when the speaker poignantly recounts the sad death of a romantic relationship: “I tried to make a clean break of that quagmire/ And got a short haircut/ And cried over my typewriter/ How love dies and evil wins.”

The majority of the book, however, is written in a stream-of-consciousness style and meanders from thought to thought, epiphany to epiphany, question to question with little to no rhyme or reason. This lack of clear focus makes getting through the material difficult. Readers are startled when fictionalized scenes between unlikely characters (a cat named Fog Gears and a mouse named Sub-Cycle Tears, for instance) appear out of nowhere. While the author seems to have an idea of what he wants the audience to take away from these stories, they read like allegories whose morals never materialize.

They also suffer from a lack of flow and ease, as the work is peppered with misused and misspelled words (e.g. “mussels” instead of “muscles”). “America” is consistently spelled “Amerika” throughout, but the proliferation of typos makes it difficult to tell whether this is an artistic choice or an unfortunate oversight.

Touching on many topics, Griffith explores the deeper meanings behind Christianity, the environment, politics, and mental health, to name a few. It’s obvious that he has thought and felt deeply about his subjects, and that he genuinely endeavors to make a positive mark on readers by sharing his stories. Unfortunately, those stories get buried under the weight of technical flaws, making them too often inaccessible to readers at large.