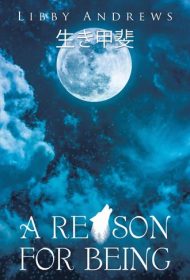 In this intriguing fantasy, Libby Andrews presents a race of shape-shifting wolf people in need of a savior, as they are slowly being hunted and killed to the point of near extinction.

Protagonist Sora can change into a wolf at will. But ever since her entire wolf family was killed by the Sector patrol, she has maintained human form, drowning her grief in alcohol. Retreating to an abandoned cabin outside the Sector fence one night, she spies a young wolf in peril as the patrol approaches. She saves his life and reveals her own wolf body as he, Kaze, reveals his human, teenage self. She is invited to join his clan but declines.

After that fateful meeting, Sora feels ever more anguished and considers suicide – but is suddenly visited by her brother Iki’s ghost. Together they spontaneously recite a poem from their youth: “Under the naked blossom tree/ Tumbling into the void of the storm/ The Saviour will arise.” Iki reveals that Sora is this Saviour of the world, which otherwise will be destroyed in a war between their kind and humankind.

Kaze’s clan joins with Sora for the coming struggle for unity and understanding between the species. She confronts not only foes, but a past lover seeking to reunite, despite their unhappy parting. And she learns that an evil wolf named Taiyo has chosen the opposite strategy, vowing to kill all humans.

Andrews constructs this dystopian fantasy with admirable skill. Sora is highly believable, and Kaze is a sympathetic character, daring and intuitive beyond his years. Andrews cleverly injects the role of domestic pets into the plot, addressing questions of how dogs feel about wolves, and vice versa.

Although her prose contains distracting errors (“want” for “won’t,” “collies” for collides,” etc.), the story shines through.

Andrews’s multi-layered novel offers nonstop action with enough twists to keep readers guessing, a generous helping of love — familial, romantic and idealistic — and an ending that begs a sequel.