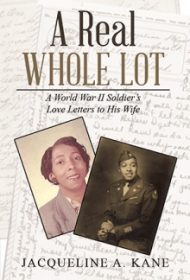 During WWII, American soldiers stationed overseas could send letters home via Victory or “V-mail,” an expedited postal service that combined stationery and microfilm. A Real Whole Lot collects love letters Jacqueline A. Kane’s father Phil sent home to her mother after he was called to serve following Pearl Harbor, offering a glimpse of wartime romance.

Kane prefaces the book by describing how, as a child, she’d hide in a closet behind two big brown grocery bags. These bags contained the letters transcribed here. Phil’s letters to Jacqueline (“Jack”) range from newsy to amorous. (The title refers to his habit of signing off with variations of “I love you a real whole lot.”) A few letters and diary entries from her mother are included, but most were lost or discarded.

Restrained from sharing any information about wartime duties, his half of the conversation is chatty (“I bought another fountain pen, and it writes like this. Or is it myself who writes like this?”) and often romantic (“With all my might, I am forever yours, sweetheart”). The few responses we see from Jack are focused on family, the weather, and boosting his morale.

Unfortunately, the one-sided nature of the letters cuts readers out of a true conversation. And readers are likely to tire of insignificant insider talk, such as, “I’d like to read Aunt Georgia’s poem. How are she and Uncle Rob coming along?” Anyone looking for the raw emotions of a soldier facing difficult duty won’t find it here.

That said, A Real Whole Lot is a portrait of a loving, young couple just beginning their lives together as a turning point in American history put all their plans on hold. It will certainly be treasured by family members and may find some interest as an historical document. In fact, Kane notes in the preface that Morgan State University will be archiving her mother’s papers.