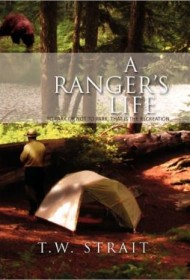 T.W. Strait’s own work with the Missouri Park Board no doubt fuels his fiction in A Ranger’s Life, the story of adventurous main character Jack Anderson’s tenure as a ranger at Osage State Park. Strait’s first-hand experience shines through as Jack Anderson tells believable tales about his time at Osage, which include funny run-ins with park campers and other more sobering tales of natural disasters and medical emergencies.

When Jack Anderson first pulls into Osage State Park’s front gate, he’s ready to take on the challenge of being a new superintendent and eager to dive right into the action. Fortunately for him, there’s no lack of excitement at this park, which consists of three public use areas with beaches, one main campground, several smaller group camps, and thousands of acres of prime woodland located on the state’s largest lake.

Jack’s daily routine involves mundane chores such as picking up trash and working on repairs, but these moments seem rare in comparison to the constantly unfolding scenarios that make up the rest of his days. Forest fires, suicide attempts, bear sightings, plane crashes, and holiday parties keep this ranger busy at all hours. And during his first summer there, Jack finds perhaps his biggest surprise of all: a lost camper who soon becomes his wife.

In A Ranger’s Life, one interesting story leads to the next. While spelling and grammar inaccuracies are prevalent throughout the text, they don’t detract significantly from the larger story, which will likely resonate with outdoor enthusiasts and other park employees. Strait captures a snapshot of one ranger’s life in his novel and also shows how the values of teamwork and respect for others ultimately lead to his character’s success.