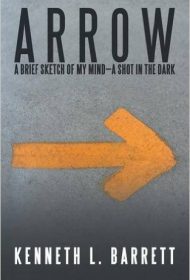 Kenneth L. Barrett’s slim memoir veers from his big ideas about reality and the meaning of life to his memories of the past and his often troubled, relationships.

The narrative begins as Barrett, 70, and his wife head from Florida to California on a road trip. As he drives, his mind ricochets between disparate thoughts (the first several pages alone touch on Newton, Benjamin Franklin, and Colonel Sanders) and he expounds on his philosophies about life.

Barrett believes, for example, that only “the brave and stubborn among us” have the stuff to search for “the meaning of life” (an idea that recurs repeatedly), while “the pathetic majority” stumble along in darkness. The big “scientific, philosophical, cosmological what-if question,” Barrett says, concerns the nature of reality. “Maybe the universe is not mass at all; maybe it is mind. Story-building mind.”

Barrett also provides glimpses into his past. Dad was a journalist and teacher. Barrett was a Minnesota art student, a Navy combat photographer in Vietnam, then seemingly a lost soul who moved from job to job. He hints at a troubled mind, only revealing his bipolar disorder and PTSD diagnoses in the final pages. This helps explain the baffling relationships he has left in his wake, including old friends who blow up seemingly over nothing and a son who is angered when his father shows up at his workplace – but why?

Barrett seems to have little insight into what caused the friction and always returns to his big ideas:  “My real-world friends come and go, but my ideas are the true friends of my mind’s eye.”  Such lack of self-awareness can be frustrating, and readers will find his philosophizing interesting, but scattered and repetitive.

In the end, the book is best described by the author, who calls it a “rambling record of my life’s road trip.” Indeed, readers may feel they never reach any tangible destination, even as they respect the purity of the author’s vision.