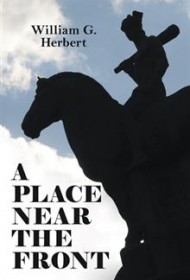 William G. Herbert’s historical novel, set between 1916 and 1919, revolves around a young Trinidadian who jumps ship in New York and makes his way into the U.S. Army in order to obtain citizenship and remain in America.

The story is a study of what life was like for a black soldier in the early 1900’s. The protagonist, who shares the author’s name (William Gordon Herbert, nicknamed “Gordon” here), becomes a member of the 369th Infantry Regiment— the famous “Harlem Hellfighters”—at a time when segregation was rampant. The author writes that Gordon “believed that the army’s great experiment in creating an all-colored regiment” would prove that blacks could distinguish themselves in engineering and technology work and that they would then be able to use those skills in post-war jobs. He discovers, however, that the roots of prejudice go all the way to President Wilson in the White House.

Written in first person, largely present tense, the story is packed with little-known events of black history, including the Camp Logan Houston Riot of 1917, in which black soldiers protesting treatment by white citizens and police marched on the city; the segregated shipping of black fighting troops overseas; the experience of the 92nd Infantry during the ill-fated battles of the Argonne, and its commander’s infamous and insulting Bulletin 35, ordering black soldiers to “refrain from going where their presence will be resented.”

Unambiguous in its viewpoint, the tale skillfully details Gordon’s personal growth. It is eminently readable, although not without a few flaws: While time-appropriate verbiage is generally used, there are occasional lapses into modern slang (“on point”; “I hear you”). Narrated by the main character, the narrative has a little too much “telling” versus “showing,” and it’s slow to get underway.

These are mostly quibbles. Overall, this is a compelling tale that rings disturbingly true. After reading the Epilogue, readers may wonder just how much of this look-back to the early 1900’s is fiction.