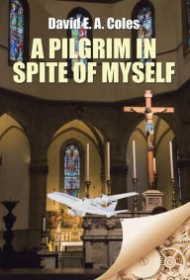 Writing from the perspective of 82 years, David E. A. Coles has created a short but keenly detailed memoir.

Growing up in England during the pre-war days and then WWII, Coles had supportive parents who propelled him towards better educational opportunities whenever possible; at his private (in England, “public”) school in Sussex, Coles found strict discipline balanced by “the glories of the Chapel” with its excellent organ music and choir. Coles’ father was a self-employed mechanic, so the young man was naturally drawn to the realm of physics, electricity, velocity—seeking to understand, design and utilize any machine that moves.

In a long career he held many jobs, starting with an internship with the Royal Aircraft Establishment, where he learned how planes are built, and then the Royal Air Force, where he had a chance to fly them. Employed by industrial giants including Rolls Royce and Volvo, he describes his moves—to Sweden, Cyprus, Kenya, London and Glasgow—with a plethora of technical detail about the work he undertook.

Sometime along the way, Coles converted from the Anglican religion to Roman Catholicism, which he advocates as “Faith at its best.” Lamentably, the account of his conversion occupies only a handful of mentions and two final, short chapters offering little personal revelation. Despite the title, the bulk of A Pilgrim in Spite of Myself is drawn from the author’s working life. Although Coles doesn’t assert that he’s a “pilgrim” in the strict religious sense, he depicts himself as a traveler through many endeavors and adventures that, ultimately, led to a zealously held religious viewpoint.

The text suffers from incorrect punctuation, most often a lack of commas, and is written in a straightforward, factual style, rather than a more engagingly personal approach. Ambition, determination, technical expertise and a wry sense of humor dominate these recollections that will hold appeal for the author’s family, friends, colleagues and those contemporaries with a particular interest in the era.