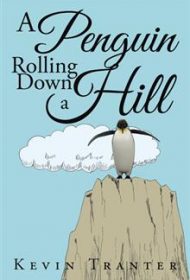 Kevin Tranter shows a flair for the absurd in his entertaining debut novel, A Penguin Rolling Down a Hill.

In the fine comedic tradition of British masters like Douglas Adams and Monty Python, the author revels in turning high-brow language and wordplay on its head for satiric effect—a quality that enlivens this young adult/crossover fantasy novel that successfully fuses elements from many genres and styles. Here, a fantastical dragon has the perfectly ordinary name of Derek, and high-minded philosophical questions come along with Elvis Presley lyrics. Even the title is a reference to a persistent pun that serves as a key plot point.

In Penguin, the “mysterious and fascinating” Dream World hosts the genesis of all of humankind’s dreams, good and bad. Mr. Good, the dream ambassador, conceives and executes all tranquil and serene night visions at the Palace of Somnium, while Vile oversees nightmares in the aptly titled Torment Towers.

When the advent of 3-D computer technology places Vile at a disadvantage (it helps make good dreams more powerful than nightmares), he enacts a power grab, seizing the Palace of Somnium. He plans unending, vivid nightmares for all humankind, and it’s up to Lorraine and Melvin, two teenagers summoned to the world of dreams, to navigate Vile’s evil maze of challenges and end his reign of terror.

Tranter summons echoes of L. Frank Baum’s Oz stories alongside cues from modern young adult fantasy writers like Phillip Pullman, while incorporating historical references and offers over-the-top antics straight out of a Pixar movie. Vile’s lackeys, for example, operate with the bumbling clumsiness of cartoon apprentices. Underlying it all is a flair for the best kind of dry British humor.

Although the story occasionally lags in terms of pace and action, Tranter offers a compelling, funny narrative that stays afloat despite the wealth of ingredients. Fans of fantasy, teen fiction and the best in British comedy will find much to enjoy in these pages.