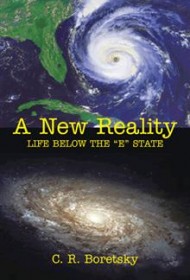 In A New Reality: Life Below the “E” State, C. R. Boretsky sets forth a corpus of teachings based on a “merging of science and religion.” His teachings, he assures the reader, are the truth and derived from God. Thus, Boretsky enters a long line of spiritual spokespeople such as Alice Bailey, Aleister Crowley, and Jane Roberts who claim imprimatur from a higher authority.

Many of the issues which Boretsky addresses are those recognized by the general public. There are probably few people today who do not worry about global warming, over-population, diminishing resources, and nuclear proliferation. Boretsky offers some common-sense approaches to these dilemmas. For instance, he indicates that education is the key to transformation, and insists “that mankind limit its practice of unhindered population growth.”

In addition to its practical applications, Boretsky’s physics also impinges on the metaphysical. The aether, which he posits as “the medium through which all electromagnetic energy passes,” is also “the medium in which the spirit world exists,” and praying to a higher power is “seeking guidance and strength from an entity…at a higher energy state.”

With its emphasis on physics, A New Reality is not an easy read, and, in addition, some of the author’s arguments are murky and hard to follow. Nevertheless, the book falls within the compendium of works like The Field and The Tao of Physics that interpret life from both a religious and scientific viewpoint. It is a brave, if unevenly successful, attempt to bring ethics, science and religion under one umbrella.