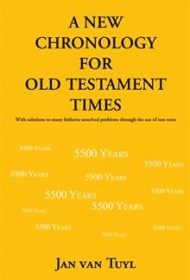 If the Bible had been written today, there’s a good chance most editors would reject it for publication. Not because it’s not a fascinating story with a deep, resonating message, but because there are so many inconsistencies and gaps in the narrative.

In A New Chronology for Old Testament Times, author Jan van Tuyl delves deep into Biblical history and secondary records, including the Antiquities of Josepheus, the Book of Adam and Eve, and the Book of Jubilees, in an effort to connect historical dots and provide a more concrete portrait of the most widely read book in the world. In the process, he brings to light little known and forgotten lore, for instance evidence of two Gods involved in the creation story of Genesis (God and Lord God. God actually uses the word “we” during the process of forming creation out of the void); the origins of ritualistic sacrifice; theories that attest that the Paradise of Adam and Eve is really located in what is Jerusalem today; and the real date of Jesus’ birth.

This is a prodigious and ambitious work (540 pages, augmented with charts and diagrams) that begins with Genesis and examines in great detail the Flood, Abraham and his descendents, Moses and the Exodus, the kingdoms of Judah and Israel, and the Babylonian captivity — to name just a few of the periods covered here.

It is apparent from the first few pages that van Tuyl is enamored with his material, and the author successfully channels his joy onto his pages, seemingly taking the reader by the hand to reveal some secret or lost history his research has uncovered. Van Tuyl’s intelligence is apparent and his breezy style makes for mostly easy reading. Scholars and academics will balk at the book’s lack of proper footnoting and citations, but general readers interested in seeing the Bible in a wider historical context may find this an interesting excursion.