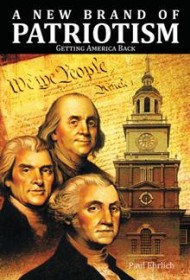 A daring attempt to rescue America from the clutches of the greedy rich is the basis for this novel, written as a kind of morality tale by Paul Ehrlich, an engineer and former professional concert violinist.

As the story’s plot gets underway, prominent people and their entire families are disappearing. No one knows why or where they have gone. It is soon revealed that five former combat pilots are behind the action. They have kidnapped numerous selfish, wealthy people, leaving them to fend for themselves on two remote islands, Remedia and Parasita, in the hope that they will reform their attitudes.

The book’s point of view changes from that of people on the island (who must eat broiled snake, leaves and turtle eggs to survive) to the “Group of Five” who captured them and are now working to create a newly purposed political party while pondering how to bring the kidnapped people back.

Ehrlich’s story is well-structured and soundly written. But while the characters’ actions are detailed, the narrative never exhibits the fear, anger and tension one would expect from those suddenly forced to live with little food among poisonous snakes. For example, just a week into banishment, one husband and wife comparing notes agree that they had previously “somehow got shunted onto the money track, or the power track” and that they now prefer this meager life on the island. Also, why is no one looking for them?

This passionate book is fresh in its concept regarding coercing the rich into becoming more compassionate. Yet avid readers of this genre will find gaping holes in how such a feat could have been accomplished with so little backlash. That said, the book’s likely audience will be readers seeking ideas toward a better balance between rich and poor.