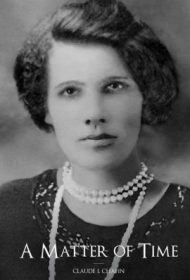 In A Matter of Time, Claude L. Chafin uses his intensive research and interviews to craft a fresh story, delving deep into three generations of his Kentucky mining family’s origins.

At the center is Chafin’s grandmother, the brave but unfortunate Grace. She will do anything to keep food on the table and protect her four children, including her daughter Eva Lou, the author’s mother. Bootlegging, riots, sudden deaths and murders routinely occur among of these hardscrabble folk, beginning with a mysterious illness that sweeps away Rebecca, the mother of Grace’s husband, Taylor.

Taylor himself, who battles management and law enforcement during the miners’ quest for unionization and fair wages in the early 1920s, meets an untimely end due to a mining “accident.”

And that’s only the beginning of Grace’s trials. A few months later, Eva Lou gets caught in rock-throwing crossfire between factions of boys in the mining camp. The only thing that saves Eva Lou’s shattered ankle and calf from amputation is Grace’s willingness to do whatever it takes to prevent her daughter “from spend[ing] the rest of her life in a wheelchair…”

The book is logically divided into three parts: Taylor’s side of the family, Grace’s side of the family, and the story of Taylor and Grace. Unfortunately, especially in the first two sections, the characters aren’t developed enough to provide a strong sense of individuality. This will likely cause head-scratching confusion, since the story dives right into the action and the middle of several characters’ lives.

Additionally, while occasional use of dialect can sound natural, too much of it creates a tiring read, as is the case here. (“Don’t know, But I just gotta feelin’. I wanna go check on ‘em. I ain’t seen my ma in a while anyway, now’d be a good time.”)

This story is truly compelling in places and has the material for a page turner. But it requires revision to reach its potential and a broad audience.