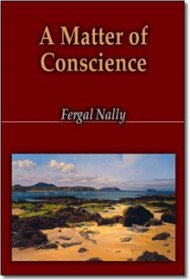 Fergal Nally has impeccable credentials to write a novel about a brilliant young doctor engaged in the war against cancer. Nally is an M.D. He has served as head of a clinical department in the University of London, and he is a cancer researcher. He is also a Fellow of the Royal Society of Arts.

His protagonist is John Nicholson, a doctor hoping to develop a breakthrough drug that will alleviate the pain and suffering of animals and human beings. But Nicholson soon discovers that he is up against animal rights activists, who burn his laboratory and destroy his research, as well as pharmaceutical companies, corrupt colleagues, and the bureaucracy of modern medical care. The rivalries of researchers and Nicholson’s own misgivings about the part he is forced to play in the cutthroat competition for cancer cures are dramatized in a well-paced and vivid narrative.

Given Nally’s background, one may wonder why he did not turn to nonfiction to explore a field he knows quite well–and from the inside. Why treat as fiction so many elements that could easily be incorporated in the kind of narrative that Devra Davis deploys in her riveting The Secret History of the War on Cancer, for example?

The answer is that Davis cannot go beyond speculation about the motives of others. She cannot take us into the boardrooms and other centers of power. She cannot, as the novel does, make up dialogue or tell us what characters are thinking. In short, the power of Nally’s work resides in the intense and intimate scenes he creates to portray so many conflicting interests that converge on his besieged hero. That kind of convergence is rarely attainable in nonfiction, and Nally shows why.

The author has delivered a skillful tale of behind-the-scenes’ medical intrigue. His compelling story should appeal to a wide audience.