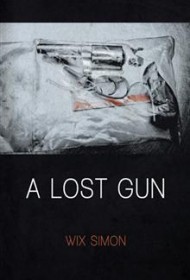 Starting a police procedural with a grave error by the story’s central detective is a risky gambit: Should the reader really trust the instincts and skills of an investigator whom we first see as a bumbler? As it turns out in Wix Simon’s A Lost Gun, the answer is “maybe.”

Green and partnerless, Georgia detective Jessie Sands is alone on a stakeout when she witnesses a monstrous triple murder–including two infants–by a killer suspected in two earlier murders. She hadn’t called for back-up and although she’s hiding only a few feet away, the killer escapes while she pukes.

Jessie follows her perp to a rural bridge where she finally confronts him, still alone. The arrest goes badly and the young detective ends up shooting the guy several times before–oops–accidentally dropping her handgun in the river. When Jessie’s gun later appears to be the murder weapon in the high-profile slaying of a prominent lawyer, she plunges into a chasm of greed, human trafficking, police corruption, and moral conflict deeper and darker than she could have ever imagined.

Simon’s second crime novel, A Lost Gun features a fairly large cast of characters, led by Jessie and Atlanta PD Internal Affairs Detective Bud Prior. Suspenseful and solidly written, Simon weaves a low-key story that’s credible and, thankfully, provides Jessie a chance to redeem herself. Does she succeed? The answer to that question might be the most complex element of A Lost Gun.

A one-off thriller with a big cast doesn’t allow for much character development. And if you’re a fan of superior police procedurals from Michael Connolly, John Lescroart, or Joseph Wambaugh, A Lost Gun will feel shallow. But despite the inauspicious opening, Simon has crafted a decent story with a worthy ending.