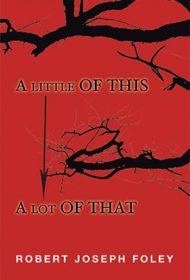 In this voluminous story collection, Robert Joseph Foley moves from a dark, Southern gothic story to tales exploring interfaith relationships and marriage, and the subsequent effects they have on generations of family.

The book is comprised of three parts: a self-contained novella; 14 interlaced stories focusing on the extended Steltzer family; and “Final Words,” a standalone short piece that speaks to a lone wordsmith’s desire to share his poetic voice with the world.

From the opening entry “The Story of Rupert Chrome,” readers are drawn into a world of mystery and reckoning. Here an oppressive landscape envelops an enigmatic visitor’s arrival, sudden missing children, and a resulting trial. An unexpected epilogue reveals a shocking twist.

The author’s descriptive ability shines through; for example, he writes that an elderly character was ” … so old that his skin appeared to be painted on his bones.” Southern dialect interspersed throughout lends flavor to the storyline, although sometimes it’s a bit difficult to comprehend.

The “Steltzer Stories” connect well-defined central characters buoyed by an equally colorful and supportive cast. Together, they relate a chain of events involving a crazed, Jewish mother at odds with her less-devout daughter, Yolanda; the death of the buffering father Shmuel; the destruction of the family home, and Yolanda’s examination of a box of memoirs that reveals long-hidden family secrets.

Foley creatively showcases humor amidst pathos. For example, when over indulgence wreaks havoc on a newly engaged man’s intestinal tract, his route to tell his Irish Catholic parents about his upcoming marriage to a Jewish woman becomes a series of diverting interruptions by neighbors, as he attempts to fight nature’s call.

A Little of This/A Lot of That is an entwining exploration of religious differences, ghosts of the past, uncovered truths, and an unwinding thread of multi-generational connections. While some happenings could use a trim to speed the pace, Foley’s threefold offering provides quality storytelling.