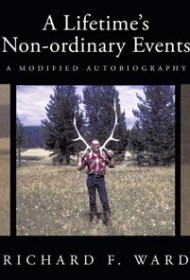 In his introduction to this unconventional memoir, author Richard F. Ward specifies that “the reader’s entertainment is the effect I hope to impart.” He meets and exceeds that goal with this collection of vignettes. In chapters ranging in length from half a page to two pages, Ward recounts a series of events ranging from his birth in 1923 to a date in 2008 when he won $300 in a raffle. In between, he packed a lot of living into his days and was wise enough to stop and take notes.

Among other things, Ward landed on the beach at Normandy a month after D-Day, worked as a cryptographer during the war, traveled the world chasing solar eclipses, dated the same woman for over 40 years, and crossed the U.S. on several Elderhostel trips. Ward’s writing is open and chatty; the occasional typo or misused word doesn’t detract from what he has to say. His agreeable tone lightens the occasional raunchy passage (if you don’t know what a “Piccadilly commando” is, you will after reading), and the story overall is funny and engaging.

Ward’s “girlfriend” of 42 years was African-American; it’s notable that during the beginning of their courtship, they felt safer traveling out of the country than within it. A year after her death, he met her first cousin and began a romance that led to their wedding a few years later.

While this volume is long on vacation recaps and sometimes glosses over what seem like more interesting stories (Ward worked with Dashiell Hammett while in the army, but it’s given no more attention than his many sea cruises), it’s nevertheless enjoyable throughout, in part because of the sheer breadth of Ward’s experience. Many of these experiences were ordinary for people of his generation, but capturing them for posterity is a gift to the rest of us.

BlueInk Heads-Up: Ward lived through such a generous part of American history, and he captured snapshots of New York City during the World’s Fair among many other scenes. Historians may find gold among his first-person recollections.