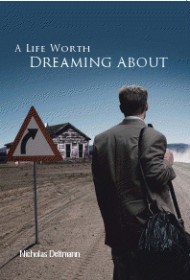 A Life Worth Dreaming About is a valiant effort by author Nicholas Dettman to update A Christmas Carol for modern times. Carl, our present-day Scrooge, loves money beyond all else. He’s selfish, mean-spirited and misogynistic. But what worked for Charles Dickens doesn’t work as well here.

In Dettmann’s prologue, the reader meets happy, suburban, 52-year-old Carl who suddenly has a heart attack and presumably flashes back to his 32-year-old self, before the self-improvement. That alone is confusing (is future or young Carl living in 2012?). Then there’s the perplexing question of why Carl is such a miserable human being. It appears to be because he grew up poor and neglected, but any evidence the author gives to support this is contradictory (for example, Carl goes to school with ragged clothes and the narrator tells us “no brush or comb was available for him,” yet his home has a “nineteen-inch TV” –albeit a black-and-white one with no cable.

To make matters more offputting, there’s the unrealistic dialogue. When Carl loses his scholarship because he chooses to party with his girlfriend rather than take his final exam, they have this exchange the next day:

“Is everything okay?” she asked nervously.

“No, I missed my final. I lost my scholarship! And it’s all because of your stupid party!”

Dettmann’s plot clips along, but he commits rookie mistakes: he has an obsession with meaningless detail (the tab was $19.35; it’s 7:23); and over-explains why Carl doesn’t answer his cell phone (the battery’s dead; he left it overnight in his desk drawer, etc.), obviously for plot purposes. A businessman who isn’t plugged in 24-7? That just doesn’t compute.

Dettmann gets points for his clear enthusiasm in writing the story and clever idea, but one thing is certain: Dickens needn’t fear for his own place in the pantheon of literature.