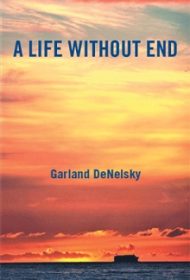 Garland DeNelsky’s A Life Without End is a speculative fiction novel examining the anxieties posed by mortality through the introspections of a man obsessed with the possibility of an afterlife.

After the loss of his childhood dog when he was five, Stan Miller couldn’t accept the idea that life simply ends. As a result, he fixated on the afterlife, embarking on a lifelong journey to find answers. Seeking advice from authorities ranging from theologians to psychologists, he grew compelled to make a radical choice: preserve his own life in the face of terminal illness by being cryogenically frozen, with the hope of a future revival.

Now, a lifetime later, in the year 2068, Stan is resurrected into an unfamiliar world. Estranged from his descendants, who are threatened by his return, and isolated from all he knows, Stan retreats to the comfort of a vacation cruise ship to evaluate the choices that brought him to this point. There, he meets Rosemary, a cruise employee who feels in many ways disconnected from her own time and culture, and together they find a common kinship and unexpected revelations.

A LIfe Without End invites readers to ponder substantive questions about the impact of dying and the nature of a life well-lived. Relationships between characters (partners, children, friends) center DeNelsky’s story, and each is thoughtfully imagined. The relationships between Stan and his late wife, and with Rosemary, are each presented with a refreshing sweetness.

The narrative is not without imperfections, however. Transitions between future and past scenes feel clunky and unnecessary, like the dissolve effect signifying flashbacks in a classic sitcom.  Also, conversations (which comprise most of the book) can run long and grow redundant.

But for all of that, A Life Without End succeeds in bringing a unique premise to life, assiduously adhering to its central themes of love, life and death. Despite its flaws, it poses questions likely to intrigue anyone prone to reflection on life’s greatest mysteries.