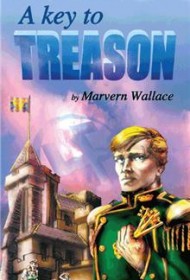 In their novel, A Key to Treason, Marjorie and Vernon Wallace, writing under the alias “Marvern,” imagine a young man’s struggle to maintain loyalty to his fictional European country despite Nazi occupation and internal conspiracies.

As a 19-year-old military cadet in his native Einland, Thaddius Gohr meets young Prince Rhodias. They quickly become best friends, and when Rhodias succeeds his father as king he appoints Thad as his guard captain. During his country’s occupation in WWII, Thad zealously safeguards the treasury funds, surviving a hostage situation as well as several assassination attempts by jealous fellow soldiers and angry Nazi collaborators.

In an unusual approach, the story is narrated by Thad’s younger sister, Edris, who wasn’t present for many of its noteworthy events. By the mid-1990s, the novel’s present day, Edi and Thad have retired to California, where he has assumed a new identity. Edi compiles her brother’s recollections for an investigator documenting Nazi atrocities.

The book boasts colorful dialogue, particularly exclamations and insults such as “Great frogs!” and “Paranoia, you cabbage-head.” Thad, especially, has a wry, Wildean wit to his speech, as in: “she’s polishing my manners, so I won’t crunch a demi tasse [sic] cup or lose a wrestling match with a boiled crustacean.”

Unfortunately, the choice of Edi as narrator hampers the story’s immediacy. Climactic scenes such as Thad’s dungeon imprisonment lose impact when translated into flashbacks or oral memories. Meanwhile, Edi’s account of her brief time as a housewife in Brooklyn—immigration, marriage, career and widowhood condensed into five pages—feels like an irrelevant aside.

The novel’s fictionalized elements, along with scenes set at a country fair, give it the air of a light-hearted, even pastoral parable —which is sometimes at odds with the reality of Nazi brutality. The lighthearted tone will perhaps appeal more to The Sound of Music fans than to dedicated readers of war novels.