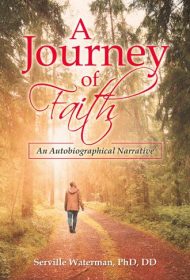 Waterman briefly explores his childhood in Barbados. Born in 1945 to a prophetess and a father who often disappeared, he was the 11th of 13 children. Four siblings died at birth. He notes that during his childhood, he experienced “special visions, strange appearances and uncanny occurrences.”

After his father’s death, Serville suffered severe diarrhea. He recalls “pleading with God for help,” when “suddenly, I saw this beautiful middle-aged woman, with golden blonde hair…She laid her hands on my stomach and the pain left my stomach instantly.”

Later, his brother and sisters invited him to London, where he emigrated as a teen in 1960. Waterman took a series of jobs, which became his habit when people discovered his strange abilities and he was forced to find another job.

Serville’s spiritual encounters pepper the book. For instance, one day when staring at the wall, he writes that two men dressed in military uniform suddenly emerged from the wall. “My instincts told me that one of the men was me.” When the author hears a voice saying “I am going to give you a house,” he soon buys a house, despite having only $25 to $30 per week to spend on it.

Such stories can be hard to believe, and the author’s writing style tends to undermine his authority. Waterman jumps from one bizarre event to the next. It’s hard to pinpoint the timeline, and he often fails to give enough context to fully understand the story. For example, recollecting surgery for cancer of the rectum and anus, he notes that when he went to see a doctor involved in his surgery, the doctor somehow didn’t know that “my rectum and anus had been removed.”

A Journey to Faith might appeal to those passionate about supernatural stories. But others will struggle to connect with this memoir.