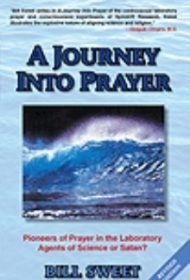 A Journey Into Prayer tells the ultimately tragic true story of Bruce and John Klingbeil, a father-and-son team that scientifically investigated the effectiveness of prayer. Recounted by Bill Sweet, a friend and participant in the Klingbeils’ research, it provides an account of two men obsessed with an ill-fated research project.

The Klingbeils were Christian Scientists, which led to their interest in healing through prayer. They created the non-profit organization Spindrift and began their research with a simple experiment where participants prayed for positive outcomes for plants and yeast. Sprouting beans placed under duress, for example, could be divided into experimental and control groups. The numbers of sprouts could then be documented after prayer was used on the experimental group. Per the author, the prayed-for beans fared demonstrably better than the control group.

Choosing non-human subjects allowed them to bypass concerns about the placebo effect. Still, they couldn’t eliminate other variables; e.g., when they ran afoul of the Christian Science church, congregants from several different Christian groups were instructed to pray against the Klingbeils’ research, confusing whose prayer was being measured. The experiments worked best when only a few people knew when a volunteer prayed for the plants. ​

The Klingbeils were plagued by skeptics, the experiments were never independently repeated, and their credibility began to suffer. Their devotion to their research eventually cost them their church membership and reputations. Ultimately, their obsession and consequent exhaustion drove them to take their own lives.

A Journey Into Prayer is written in a plain, straightforward style, with events presented chronologically. While aiming to provide a convincing case that the Klingbeils’ research was a success somehow overlooked by the scientific community, it falls short of that goal. It is more effective, however, in painting a portrait of the toll the conflict between science and religion took on two men trying to bridge that gap.

The narrative would have more impact by focusing exclusively on the latter, offering the kind of in-depth character study that fuels serialized podcasts. As is, Sweet delivers the bones of a fascinating story, but lacks the necessary journalistic distance to allow the tale to reach its potential.