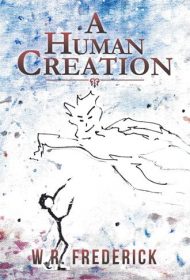 In recent years, authors Richard Dawkins, Christopher Hitchens and Sam Harris became standard-bearers of the “New Atheists.” This school sees the God hypothesis as not only an unscientific proposition but also as a dangerous delusion. In A Human Creation, W.R. Frederick’s posits that God is a human fabrication intended to meet psychological needs.

Frederick begins by reviewing the worldwide religious traditions. He then defends the theory of evolution against the notion of Intelligent Design and discusses neurophysiology and how the brain may have evolved to favor a belief in God. Frederick suggests that religion has been manipulated as a way of “acquiring dominance over communities, territories and wealth” and maintaining this dominance through fear. The book’s final chapters discuss the origins of the universe and of life on earth absent the God hypothesis.

While the author provides food for thought, the book contains many errors large and small. For example, there was no “forceful conversion of the masses” to Christianity under Constantine. And Frederick repeatedly refers to the Gallup research organization as “Gallop.” In many cases, he states what “must have been” the case without providing evidence to support the claim. For example, aiming to point out flaws in religious texts, he notes that stories and verses were orally passed down through centuries. As a result, he adds, “error or deliberate change had to enter into” the written accounts of “Buddha’s life and teachings.” Saying that something “had to” happen is not proof.

Frederick also often calls attention to himself in the text, such as: “I am repeating myself…” or “This chapter has been the most difficult for me.” These frequent personal interjections are unnecessary and become distracting.

Frederick’s is a colloquial account of one man’s struggle with the Big Questions of existence, drawing heavily on his atheist predecessors. In his introduction, he claims there’s little new in his book, and he’s correct. For now, Dawkins’s The God Delusion remains the gospel of New Atheism.