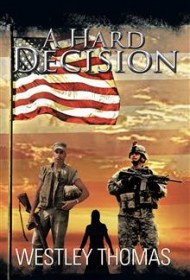 The consequences of war don’t stop appearing once the battlefield has been cleared. In A Hard Decision, playwright Westley Thomas looks at the aftermath of Vietnam through a love story with a twist.

The play opens with newlyweds William and Zera crossing the threshold of their new home, knowing they’re about to be divided by William’s impending service in Vietnam. When he’s killed in action, the trauma causes Zera to lose her baby, but she finds love again, marrying Steve, a man her friend sets her up with at a party. She’s later shocked to hear from a man claiming to be her husband, but it turns out to be true—William was a prisoner of war, and now he’s home. What will Zera do?

Thomas has an inventive answer to that question, as friends become an extended family in one of the play’s subtler twists. But he struggles to keep the dialogue from sounding stilted throughout. When William runs into Steve on the street, their conversation includes lines such as, “I don’t know what to say, except life is like two ships on the ocean passing in opposite directions never to pass again. It is the same with people.” This is hardly the stuff of a warm acquaintance. Similarly, wartime interrogation scenes have the tendency to overstuff the conversation with information that could be hinted at or shown, meanwhile, removing all the suspense from what should be intense material.

After setting up the play’s central twist, some heavy foreshadowing leads to a tragic conclusion that feels forced. Two main characters face a senseless act of violence that seems to be trying to forge a connection with the war and issues of PTSD but swings much too wide of that mark.

Thomas has found an intriguing premise and setting for A Hard Decision, but the play needs some revision to be emotionally effective. When it comes to drama, sometimes less is more.