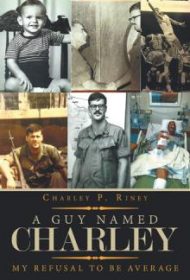 Although beset with a litany of illnesses throughout his life, Charley P. Riney has survived and excelled, thanks to a philosophy he learned from a former college basketball teammate. In this memoir, the lifelong teacher and coach reflects on his life and explains why it’s a philosophy worth adopting.

Riney’s teammate was diagnosed with cancer and given only a few months to live. But after the doctor’s deadline had long passed, he told Riney his secret to survival: “I’m not average. I’m taller than average [he was 6’8”], my grades say I’m smarter than average. . . My success in the business world is evidence I’m above average. Well, the average guy might die in a few months, but I’m not average. I’m going to live for years.”

And he did, for 30 years. Riney adopted his friend’s “I’m-not-average” mantra and the positive approach it engendered.

Throughout the book, Riney ascribes unusual occurrences he experienced as “definitely not average” or “far from average,” whether it be his free-throw percentage to serving at funerals while in the military to the success of a high school track team he coached. Interestingly, even negative events fit under this umbrella. He survived chronic congestive heart failure, six stents, quadruple bypass surgery, three heart attacks, insulin dependence, lupus, stage three kidney failure and skin cancer. “No way that’s average,” he says.

Riney’s writing is clear and workmanlike, and the book includes a 45-page photo section that illustrates various episodes in the author’s life. The author tells his story in chronological order, simply and without bombast and comes across as a genuine, likeable guy. Even when detailing impressive accomplishments, such as getting a full ride to college, he does it without braggadocio.

Lacking the artful narrative arc and literary flair of more accomplished memoirs, this book is likely best suited to Riney’s family and friends. But even general readers can learn something from his refreshingly positive approach to life.