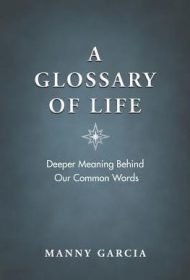 Often, authors of motivational books fall into one of two habits: sounding like overly exuberant Pollyannas or relying heavily on religious views that can overpower some readers. Happily, A Glossary of Life: Deeper Meaning Behind Our Common Words avoids these traps while serving as a powerful calming tool that encourages us to think about life in new ways.

The book is the culmination of nearly 30 years’ worth of Manny Garcia’s notes, journal entries and readings of various spiritual texts, from the Bible to the Tao Te Ching. It’s meant to challenge our assumptions and “reconnect humanity to ancient truths.”

Organized without traditional chapters but rather alphabetically by topic, Glossary covers close to 150 subjects, from “Abundance” to “Z-Axis of Spirituality,” which Garcia defines as “spiritual awareness that was always waiting to be discovered.” Some entries span several paragraphs; others are longer. All are well-written and easy to read.

Throughout, the author uses a gentle but level-headed tone to diffuse negative concepts. Under “Arrogance,” for example, he urges readers to be compassionate “toward the arrogantly egotistical; the size of their ego is directly proportional to the size of their deeply-held insecurities.” About “Confusion,” he says, “When you’re confused, you aren’t lost, you’re simply exploring.”  The recurring theme of “It isn’t bad; you just don’t understand yet” reminds us that problems have a way of straightening themselves out eventually.  One of Garcia’s most convincing “aha” moments occurs when he reminds us that terrible restaurant service pales in comparison to the lack of electricity in some countries and recommends that we ask ourselves, “Is this a first world problem?”

Some of Garcia’s suggestions may seem tough to heed—stopping each time we judge someone else to consider why, for example, isn’t easy—and his advice might not stick for long. But at least in this moment, his pearls of wisdom shift our perspective away from what troubles us. And after all, it’s only this moment that counts.