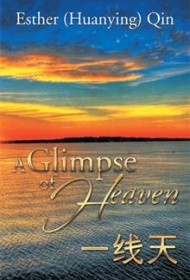 Author Esther (Huanying) Qin, an immigrant from JiangXi Province, China, who now lives in Texas, offers poetry in both Chinese and English in this bilingual collection titled A Glimpse of Heaven.

The book is formatted with the Chinese preceding the English, poem by poem, rather than arranged on facing pages. The subject matter reflects Qin’s Christianity, which she embraced after she came to the United States. At first she struggled to perceive God by reasoning. Ultimately, she had a vision and conversion; her poems express her gratitude for her “wonderful journey of a pilgrim.”

But readers expecting nothing but joyful poems will be surprised, Qin’s preoccupation with death emerges with pieces such as “Path of Death,” which laments, “Loneliness is my ever present shadow / Yet it feels more real than my life / Desert, a twin sister of death / Yet it constantly expands and swallows.” Another example is “Altered Journey,” a rather bleak poem that begins, “I boarded a train / the moment after I was born / Of which the destination is called ‘Death.’”

The train and journey metaphors are continued in the poem “Love Is Light,” which begins, “It is hard to remember when / my train of life entered the tunnel of the heart / There, all sadness is locked into endless darkness.”

The language in this collection is simple and deals almost entirely in abstractions (“Every relationship is conveyed in lives”) and generalities (“Behind the universe is the hand of God”), rather than employing the kind of specificity that makes for powerful and moving poetry. It lacks the original imagery, details and settings that would fully engage readers and bring them into the author’s world.

As a result, though most readers would admire the book’s bilingualism and the strength of Qin’s faith, the poems will have difficulty capturing the imaginations of general readers.