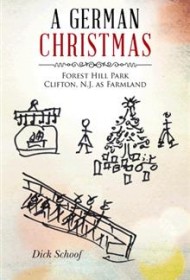 This slim memoir contains joyful stories of the author’s youth spent fishing and exploring in undeveloped New Jersey in the 1920s and ‘30s.

Author Dick Schoof still sounds like the outdoors-loving 10-year-old who took apart rollerskates and nailed them to a two-by-four to make a skateboard, and pulled catfish out of the lake during summers at Forest Hill Park. He writes of rescuing a heron, picking blueberries and other childhood adventures. With frequent exclamations such as “We never got caught!” or “What a day!” Schoof shows us his childhood through a rosy lens.

While such a narrative might attract readers who also grew up at that time, the book unfortunately presents many reading challenges. The nine disconnected chapters follow no chronology, and the tone is so informal that characters are referred to as “Ronnie’s dad” or “Mr. Struble.” We’re left wanting to know more about these characters and events that played an important role in the author’s childhood.

Additionally, the only date the author mentions is his high school graduation in 1942 (the back cover notes that the stories take place “in the 1920’s and 1930’s”). Rather than a story with a strong narrative arc, the book reads as if it could be a transcription of stories Schoof told his grandchildren as they gathered around his feet.

Schoof doesn’t say why he wrote the book, but without a solid storyline, such disjointed boyhood yarns are unlikely to interest readers outside his family. Still, residents of New Jersey may enjoy reading about the days when a boy could spend hours exploring the woods without running into anyone except a homeless man pulling a bass out of a lake near Great Notch with his bare hands!