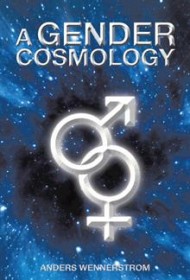 Anders Wennerstrom’s A Gender Cosmology examines the complexities of gender identity in a prolonged and unusual poem. As he notes on the back cover: “This enigmatic poetry book deals with gender, not restricting it to the constructions of the human minds but…in human contexts that will surprise the reader.”

The poem begins with an interesting image: “The stones outside are copulating,/ and they are gendered/in several ways…” Throughout, the speaker refers to transgender, gay and heterosexual situations in ways that feel mysterious and enlightened, if one considers the emancipation that arises from blurring the lines between the sexes. But English doesn’t appear to be the author’s first language, and his lack of nuance with the language often causes confusion.

Like a Zen koan, the author sometimes uses apparent contradictions to illustrate a point, but without appropriate language skill, the result can be puzzling: “since I don’t dress in a woman dress/ in public,/ and I ever hardly dress outspoken…” The speaker seems to be confessing he can only cross-dress in private, but even allowing for poetic lyricism, readers long for more clarity.

In some ways, Gender Cosmology is similar to Gertrude Stein’s Tender Buttons, a poetry collection that uses intuitive logic and repetition to create depth and emphasis.  Wennerstrom writes: “The glass in the window is gender/ and the gender sun shines through/ to the gender man,” repeating the word “gender” to reflect humanity’s obsession with labeling everything as male or female. But unlike Stein, Wennerstrom’s editorial observations often outweigh his metaphoric illustrations, to the detriment of his poetry: “I need to be/ a woman myself/ becoming the woman in me/ that wants other women.”

Although his command of English doesn’t seem to match his aspirations, Wennerstrom has crafted an intriguing exploration of being gender-fluid. If readers focus, the gist of his meaning is fairly accessible, but due to the issues mentioned, the poem never achieves the memorability it strives for.