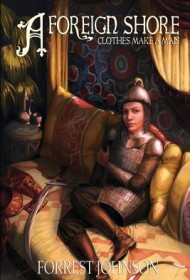 Disguising herself as a male for protection, Raeesha never expects to join enemy forces or develop tender feelings for her commanding officer, General Singer, a good-hearted soldier engaged to another woman. Amid the chaos of ravaged homes and businesses, and the separation from her brothers and parents, Raeesha finds strange satisfaction working as a translator for the newly appointed general.

The daughter of Sheikh Mahmud, a narrow-minded brute more interested in family honor than family bond, Raeesha rebels against her culture’s traditions and learns how to ride horses, wield weapons, and track the ever-changing enemy. This foe includes, at different times, her own people from the Bandeluk Empire, the neighboring Chatmaks, various invaders from foreign lands, and any of the demons, centipede people, sorcerers, or witches who roam the land.

The story moves along briskly, and each of the 26 chapters is named after one of the characters. Within each chapter, thoughts of that individual character are italicized, a technique used with distracting frequency throughout the book. These inner thoughts give readers a glimpse of what characters may be thinking – particularly unspoken sarcastic retorts – but don’t delve much into their feelings.

No specific time period is established, but the lack of technology, limited provisions, and polytheistic beliefs imply an ancient society, making modern expressions (“Perhaps, I’ve been keeping Clenas on too short a leash” and “I guess the party’s over”) seem anachronistic.

Richly drawn black-and-white illustrations by Liz Clarke appear in most chapters, which will help young adult readers envision the characters. Despite a few stylistic glitches and occasional typographical errors, this fantasy novel tells an interesting, relatable tale of rebellion that many teens may enjoy.