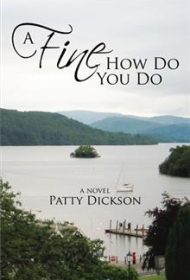 A Fine How Do You Do offers a memorable cast of characters and charming setting, while also suffering some drawbacks.

When Eric, a newspaper weatherman from Altoona, Pennsylvania decides to journey to the English countryside, he has no idea what to expect. He takes the train to Ambleside, and meets Alma Boeld, a somewhat eccentric socialite. Although she appears out of touch and even aloof, she quickly shows herself to be kind and generous. Knowing that all of the lodgings in Ambleside are full, she offers Eric a room on her estate.

While in the beginning, the story appears to belong to Eric, Alma soon takes center stage. She brings together a group of people that may never have met otherwise, and their interactions during the last months of a particular summer provide a carefully woven, although somewhat rambling, story.

This book’s strength lies in its diverse cast of characters and their rather complicated relationships. Eric has left his home and wife without a word; Alma struggles to keep her world together with the threat of financial ruin; her brother Alfred struggles with his grasp on reality, and so on. Each character is well-rounded, and the eclectic group perfectly illustrates the concept that family isn’t always defined by blood.

While the characters are strong, however, they often seem to lack purpose. There’s a fair amount of drama, but the story struggles to provide a primary conflict. For example, several potential romantic relationships never come to fruition and then simply fade into the background. In addition, what appears initially to be the event of primary intrigue, the loss of the Boeld’s fortune, is resolved with little fanfare. There’s no single event memorable enough to define the story.

Many readers will see this issue as a major flaw in the story. Others, though, may feel that the engaging characters are enough to satisfy. If so, they will find this to be thoughtful and heartwarming fiction.