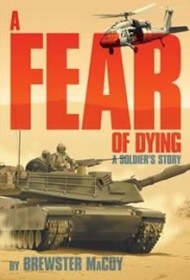 The hero of Brewster MaCoy’s novel, A Fear of Dying, was fresh out of high school, drinking beer with buddies the day his draft notice arrived in1966. Suffering from bleeding ulcers, he brought his medical records to the induction center, confident he’d be home in time for dinner. Instead, he was sent to Fort Lewis, WA.

A Fear of Dying details his Army service from basic training to flight school, followed by two tours in Vietnam as a combat assault helicopter pilot.

Although MaCoy, a Vietnam veteran, shares his protagonist’s name, it’s impossible to know whether – or to what extent – their Army experiences are also shared. Either way, the result is a stirring war novel that also succeeds as a coming-of-age story.

The wisecracking narrator we meet at the start hardly resembles the heroic pilot we come to know by the end. When the fictionalized MaCoy realizes the army is not going to send him home, he decides to do his best. If his dad could survive Normandy Beach, MaCoy writes, “I should be able to handle a little thing like Vietnam.” He more than handles it. Shot down three times, he earns 23 ribbons and medals.

MaCoy’s tone is neither sentimental nor defensive, and his spare prose often leaves the reader breathless. The story really takes off as his hero’s plane touches down in Vietnam and the captain informs the passengers he won’t be stopping; they are to exit via the rear tailgate and run and roll once they hit the runway. Not a problem, MaCoy writes, “…because when we hit the runway, we were all on our asses rolling around like a bunch of marbles.”

From then on, we, too, are in-country, sharing MaCoy’s friendships and fear, never more so than when he and his crew realize too late they’ve flown into a trap.

A Fear of Dying is a worthy addition to the literature from a war that, for many, rages on.