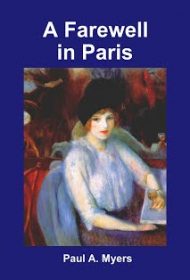 A Farewell in Paris explores a “lost generation” of American expatriates who converge on Paris after World War I in a maddening search for the meaning of life and love.

In this story, the fictional Bill, Kurt and Kate—all American emotional casualties of the “war to end all wars” living in Paris—join historical avant-garde figures such as Djuna Barnes, Mina Loy and Solita Solano caught up in a state of contradictions: ennui and exuberance; sensuality and fidelity; bitterness and creativity. For them, the Roaring 20s’ that followed the war were society’s hollow and dark underbelly.

Kurt is writing the Great War Novel, a work that’s more of a tragic memoir than fiction. Kate, a Left Bank writer, is editing the manuscript, intent on preserving its unique passion. Bill, a literary agent, sees it as a bestseller that will ride on the coattails of Ernest Hemmingway’s highly anticipated new war story. Their lives converge in unexpected, deeply personal and tragic ways.

A Farewell in Paris is actually three well-told stories: One probes the three characters’ personal struggles to help explain their sense of emptiness and foreboding in a self-absorbed world. The second is an immersion in the era’s blossoming of art, literature, fashion, dance, music, sexuality and modernism. The third is a historical lesson about how the Treaty of Versailles, which ended WWI, sowed the seeds for the more disastrous WWII.

In all this, Myers  succeeds in displaying sophisticated and empathetic insight into the period’s mindset, an era he captivatingly sketches. Although the Left Bank, the Parisian salons and cafes, and their denizens are familiar in literature and art, Myers freshly paints them, giving them their due.

A Farewell in Paris is a healthy reminder in these troubling times that we are not alone in our search for meaning and comfort. It should be a welcome addition for readers with an abiding interest in the seemingly peaceful yet troubled interregnum between two global tragedies.