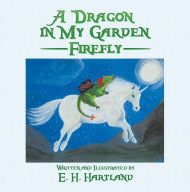 Author/illustrator E.H. Hartland’s A Dragon in My Garden: Firefly is a picture book divided into chapters for fantasy lovers, ages 9-12.

The narrative centers on Firefly, a young, spunky dragon who makes his home in the author’s garden. Most days, he takes the shape of a stone garden ornament: inert and solid. But when the universe’s magical forces align, the dragon awakens to share his story.

At the story’s start, Firefly is awakened from a long sleep by a hedgehog who tells him his task is to remind people, “especially the children of today,” that magic and wonder still exist in the world. Firefly then recounts his many adventures, telling of how he hatched and came to realize that “all the great dragons were dying out,” of his mischievous doings, of meeting the unicorn Moonshadow and magician Merlin, who eventually tells Firefly that he is destined to enter into a deep sleep “for eons,” and, once awakened, impart his stories and remind people that magic still exists in the world.

This brings the tale full circle, but unfortunately, the plot in between is convoluted and meandering, leaving many unanswered questions: most importantly, why is it necessary for Firefly to remind people that there’s magic in the world? Meanwhile, Firefly is a troubling role model who gets stumbling drunk on mead, incites a fistfight, and sets a man’s pants on fire, among other misdeeds.  Although often scolded, he remains unrepentant throughout.

Hartland’s prose can be lyrical in spots, but too many long, run-on sentences and inexplicable bolded words distract. And the book’s target audience is in question: With dense type and fewer  illustrations than a typical picture book, it’s unlikely to attract children interested in picture books;  and the picture book size is likely to turn off older, chapter book readers.

In sum, while the book ends with the possibility of continued adventures, it requires thoughtful revision before it can entice readers to any subsequent titles.