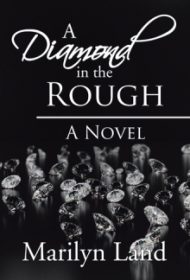 Marilyn Land’s third fictional exploration into the complex diamond market is an ambitious epic spanning half the globe and much of the 20th century.

A prologue brings readers to Tel Aviv, Israel in the present day where family and friends of Jacob Lyons, an early pioneer in the diamond industry, have gathered to honor the late Jewish philanthropist. Next, the story rockets back to mid-1920s’ Russia, as Jake’s young parents Harry and Ada Lyons prepare to emigrate to England. There, Jake grows into a fine young man who joins the Royal Air Force. He also falls in love with a redheaded beauty named Lexi Portman.

Tragedy strikes Jake’s family as WWII evolves, and soon after, Jake suffers a mechanical malfunction during a mission, crashing into the English Channel. He survives, but Lexi is taken by her father to Palestine, where she gives birth to Jake’s daughter Zoe. Once they are reunited, the book chronicles the lives of Jake, Lexi and Zoe—and a mystery is introduced.

Jake’s last living relative is his uncle, Ben Lyons, who works in diamonds in Cape Town, South Africa. When Ben passes away, he leaves his nephew a case of 100,000 carats of diamonds. These gems have no known provenance and are marked only with a single Hebrew word: “Shiloh,” meaning “The one to whom it belongs.” It’s ultimately left to Zoe to finish her father’s puzzling tale.

The novel’s sedate prose, workmanlike pacing, and passive tone may disappoint readers hoping for more high adventure; the third-person storytelling is mechanical in a way that tends to tell rather than show the story. Nonetheless, the author does a fine job of weaving her characters’ lives into real historical events, and Jake makes for a noble if unbelievably virtuous hero.

Readers who find themselves captured by the likes of Isak Dinesen or Graham Greene, authors entranced by characters caught up in events not of their making, may find a similar patina here.