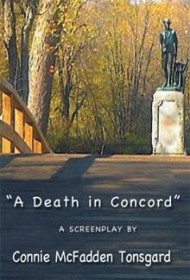 Connie McFadden Tonsgard’s screenplay, A Death in Concord, is rife with at least five of the seven deadly sins: greed, pride, lust, envy and wrath.

The story centers on defense attorney Dan Marsh,and his wife Rose. Rose has a teenage daughter from a previous lover, a girl who has little respect for Dan. Dan, likewise, seems to have no interest in the girl, yet adopts her and takes out a large life insurance policy on her. With money from Rose’s inheritance, Dan is establishing a new practice.

Rarely home, Dan uses the demands of the new practice as an excuse to spend time with his lover Rebecca. Meanwhile, Rose is suspicious, bored and lonesome; to ease her troubles, she hires a man named Valentine to build a garden pool. Little does she know that Valentine, an illegal immigrant, has been planted by Dan to spy on and then kill her in exchange for helping Valentine get a green card.

The story unspools from there: Rose and Valentine have a fling; Rose’s daughter is “accidentally” killed riding her bike home from ballet practice, and when Valentine finds that he can’t murder Rose, Dan hires another killer. That killer confronts Rose in a furiously unrealistic chase (involving a dolphin) on the darkest of nights. The screenplay concludes with an out-of-nowhere sentimental happy ending.

The first two-thirds of the story move slowly and are filled with the stuff of mundane daily life: walks with the dog, social gatherings and so on. All of the action takes place in the last third of the screenplay. Overall, the characters are unsympathetic and the action overly dramatic. Any reasoning as to the characters’ behavior is absent or unconvincing.

Given such challenges, A Death in Concord never gets off the ground. Ultimately, the screenplay is unlikely to provide a satisfying read or afternoon at the movies.