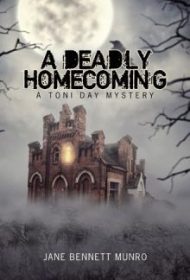 In her latest puzzler, Jane Bennett Munro brings back Toni Day, a spunky 50-year-old pathologist who is known “to love a good mystery.”

From the outset, it seems there is more than one mystery to solve as Day learns that family friend Doris — who precipitously married the charismatic Dick Campbell shortly after her first husband died — has fled her new marital home. The home appears to be haunted, Doris has been feeling sickly ever since she married, and she’s desperate to learn the whereabouts of her missing husband.

While the police delay investigation, seeing Day as a nuisance, she unofficially sleuths out the case. Along the way, her husband, Hal; mother, Fiona; and stepfather, Nigel Gray, a retired Scotland Yard homicide chief superintendent, provide plenty of good-humored repartee, comforting embraces, and cups of tea.

In this mystery, much depends upon gothic elements. Doris’ massive mansion contains more than one secret wall, a dumb waiter in deadly disrepair, and dark rooms and staircases galore. Plot advances and suspense too often turn upon unwise actions taken by Day, including unnecessarily entering dark and dangerous places solo and — inexplicably for a pathology professional — unauthorized handling of crime scene evidence. “Uh-oh,” she thinks, when told that “disturbing a crime scene is a crime in itself.”

Often, an overabundance of detail slows action. Do readers really need to know that Day “took care of business in the bathroom” or put on clothes “I’d worn the day before [and] performed my morning ablutions”? Is it necessary to say that a conference room contained “a conference table with chairs around it”?

Despite such flaws, the characters’ good-natured earnestness and lively interactions should carry fans of cozy capers along. After all, Day and her helpmeets are kind souls making a valiant effort to right wrongs, and you can’t help wondering what they will get up to next.