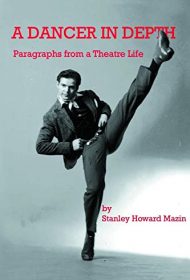 In A Dancer in Depth, Stanley Mazin recalls his decades-long career as a dancer, actor, director and producer on and off Broadway and in television.

Mazin was born in 1939. His theater career began in high school, when he joined the cast of Carousel. He subsequently started offering dance lessons. In the 1960s, he began auditioning for shows and was soon cast as a dancer in theater productions.

Mazin danced on the Ed Sullivan Show, backing up Ethyl Merman, and later became a regular on the Carol Burnett Show, spanning 10 ½ years. He worked with Liza Minnelli, Michael Jackson, Dolly Parton, and a host of other stars.

As he aged, he found it increasingly difficult to continue dancing. During his dancing career and after, he parlayed his skills into acting, directing, producing and choreographing. Later, he became a travel agent, and in recent years drives for Lyft. Despite his many accomplishments, Mazin states that his career wasn’t lucrative.

The author’s sexuality is a significant theme. Dom Salinaro also a dancer, was Mazin’s partner for 44 years. Eventually, Mazin relates, problems started in the bedroom and the author sought other sexual partners. He mentions numerous lovers and graphically details their encounters; for example: “We shared a little sexual activity, mostly oral or manual… [O]ne of his ‘things’ was to give me head while I was driving my car.”

The book is written in a stream-of-consciousness style, organized neither chronologically nor thematically. Consequently, the many anecdotes don’t result in a cohesive story. Further, Mazin relates extraneous details, such as the names and positions of co-workers and addresses of places he lived. Pages-long paragraphs often contain irrelevant information. Misspellings, abbreviations (“BTW”), curiously underlined words (“even enough to have his partner”) and other editing issues distract.

Many readers will find A Dancer in Depth challenging due to its abundant extraneous details. Those who persevere will find a fascinating glimpse into stage life, including first-hand stories about notable actors.