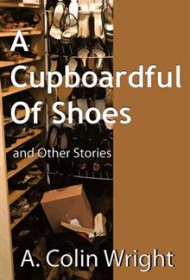 Concerned with male desire, the folly of self-satisfaction and the varieties of religious experience, these competent short stories are set mostly in Ontario, Canada, where the author has made his career as a professor of languages. But they also wander far afield–to East Berlin and war-torn northern Italy, to a quiet London suburb and the polished salons of an ocean liner crossing the Atlantic with a meek, fantasy-obsessed librarian named Horatio Humphries aboard.

Written between 1980 and 2002, the stories reflect A. Colin Wright’s evolving literary imagination. The title story, from 1984, is as plain as dry toast in its depiction of an unhappy daughter-in-law suffocated by the “terrible respectability” of her husband’s family. By contrast, the boldly experimental “Distantly From Gardens” (1992) juggles two warring narrators–one each for its troubled protagonist’s two personalities.

Wright expands his fascination with moral opposites and “doubleness” – a staple of the Russian masters he’s taught at university – in “The Comedy of Doctor Foster” (1999), an update on Faust in which the insatiably lustful title character scandalizes the churchgoers of Wittenberg, Ontario with his constant seductions and his “artistic” temperament. When “God” appears to Foster, He takes the form of an irritable codger with a lot of red devil in him. The Man’s all business: “Now, let’s make a list of what you want.”

“The President Reminisces,” a satirical foray into political science via science fiction, is narrated by a belligerent U.S. president who cannot grasp why the blissful inhabitants of an earth-like planet called Dee have embraced socialism and poetry while rejecting capitalist greed.

Hobbled here and there by plodding melodrama (“He stumbled to the bed and flung himself onto it, tears springing from his eyes in his unexpected joy”) and superfluous academic references to everyone from Holderlin to Botticelli to D’Annunzio, Wright’s fiction is generally engaging as it tackles big issues–love, war, death and theology.