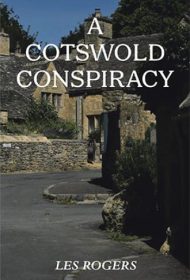 In Lee Rogers’ A Cotswold Conspiracy, a man hoping to solve his financial woes becomes embroiled in a scheme he finds difficult to wriggle out of.

Simon, an investment analyst, has a lovely family and loving wife. His two best friends, Richard, a realtor, and James, a single man and legal practitioner, live envious, flamboyant lifestyles. By contrast, Simon’s family is hit by hard times as the recession impacts his finances. His friends sympathize with his struggles, and Richard’s wife even offers to help his wife start a new business.

Then James makes Simon an enticing offer to help him out while convincing Richard to invest in his scheme as well. He discreetly invests huge amounts of money from one of his client’s accounts, with the hope that it will bring back profit without anyone finding out. Simon knows that what he’s about to do could land them all in jail. He also knows it’s just a one-time offer that could save his house and marriage, which is beginning to fall apart before his eyes.

The author takes his time building his main characters by giving them their own segments in the text. This makes them memorable and engaging. The drama unfurls with surprises as readers are taken down a rabbit hole of intrigue and possible betrayals.

Although the book starts a bit slow, it picks up steam several chapters in, and midway through the book, readers will be caught up with the story, with its relatable characters and plot that mirrors issues in modern-day society.

Unfortunately, the novel concludes with a cliffhanger that’s bound to leave readers unsatisfied. Also, at times, characters are misidentified in dialogue, and misspelled words and missing commas slow down the reading in spots.

These issues aside, Rogers has penned a fresh narrative that fans of contemporary drama will likely enjoy.