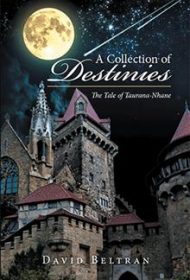 Cultures collide in this epic fantasy of old civilizations trapped in the mistakes of the past, and those who will revitalize them.

The birth of Taurana-Nhane is auspicious and strange. Born to an old woman past childbearing age, he receives his name—one denoting future universal fame—from the assembled elders. Raised by his aunt, Tau gains friends and favor as he grows. As is customary, at age 12 he’s sent from his island home of Makata to the wondrous kingdom of Lydia for three years to learn how to wage war. His Makatan culture teaches him that this is his destiny, and that all of life’s events are based on fate.

But when Tau leaves home, perspective changes. He meets Prince Draes, who is attempting to lead his people out of their past ignorance and promote justice and equality; hears stories of his own people that conflict with the lore of his childhood; and becomes entranced with the well-named, mysterious young beauty, Vixen. Sent back home, he secretly vows against all odds to return.

Author David Beltran is a Hawaii native, and echoes of that culture intertwine with the writer’s imagination to create this complex, dreamlike fantasy. The author’s knowledge of worldwide mythology, folklore and the Christian Bible are also skillfully embedded in Tau’s story.

Overall, this is a carefully constructed fable with generally lively dialogue and well-paced action. A certain didactic feel persists throughout, underscored by numerous lengthy passages in which the narrator expounds a philosophical overview. By contrast, the story’s portions depicting the developing romance between Tau and Vixen leap off the page, re-clothing Tau from a symbolic hero to an attentive lover befuddled at times by the mysterious ways of womanhood.

A Collection of Destinies traces a magical journey to wisdom. In the end, it offers a provocative viewpoint for readers to ponder: One can try to overcome destiny, but in doing so, may encounter the very fate one is fleeing.