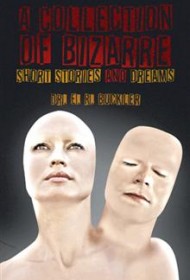 Fans of 1950’s-era horror films and comic books like their thrills quick and sometimes dirty. They may have hit paydirt here. True to its title, this is indeed A Collection of Bizarre Short Stories and Dreams. They’re not long on plot, but do deliver plentiful creepiness and a bit of sex as well.

In a story that offers a hint of lesbianism, a high school girl’s best friend is revealed to be a heroin addict. In others: An old vaudevillian dies in a doorway and is found by the police. And a lonely man seeks companionship in the wrong kind face and is arrested by the plainclothes cop he propositions. Each story’s characters have a distinct voice and perspective that shine through here, and their slightly fusty style is reminiscent of classic pulp fiction.

If there’s a failing to be found, it’s that the stories could be considerably longer and contain more plot elements. As written, we sometimes feel kicked out the door before we’re ready to leave. “Man of Distinction,” for example, is just four pages long, opening on protagonist Henry’s final moments. He’s a wino now, but used to be somebody. He collapses on the street, and two police officers find his body, which is already musty and decomposing. They pull a New Testament from his pocket, and the story ends. It’s confusing, and as such not completely satisfying, although still vivid and creepy.

There are nine stories included, as well as a selection of surreal fictional dreams based on “a lifetime collection of actual dreams,” each with limited commentary. These are brief and generally entertaining, but more stories would have been a welcome replacement, provided they were fleshed out a bit.

This Collection will not be to everyone’s taste, but fans of retro horror will love its gritty atmosphere.